Sebastian Lingserius upcoming production wants to propose a re-imagination of a historical event. A performance about what would have happened if the philosopher committing suicide on the 4th of November 1995, jumping from the third floor window of his Parisian apartment, had woken up, and spoken about the experience of his dying body? How the speed of the organs where shifting, changing functions, re-arrange themselves, and the body-parts empties out, and how this might express itself? What will be presented is thus a fiction of possibilities, rather than a representation of a historical event. The piece would like to suggest an alternative history, a possible shift in the dying philosopher’s concept, turning him against himself. Death as an event.

The piece will be produced and premiered in the spring of 2014 at the House of Dance in Stockholm, and a research is now ongoing in Paris (at Cité International des Arts).

In the last years a wide range of choreographic strategies has been developed with different intentions and expressions such as BdO (bodily de-organization), Magnetology and Mapografi. The idea is now to develop and expand these practices individually, with various goal, that together form a patchwork of choreographic proposal. What we’re wondering is, how can the audience’s reactions (from their seats) initiate various audio material from different spatial directions which in turn can affect the choreographic strategies? The idea is to use directional sound, through 33 loudspeakers attached under the audience’s chairs that make the audience ”in dialogue” between each other, and so can their reactions be used and generate initiations points for the activities performed on stage. Unleash the potential through combining a particular narrative and the unpredictable, practices in constant alteration. Open up for potential lines of flights, by challenging the piece to alter/become different.

Bod(ill)ess want to reject the idea of body and identity as something singular and fixed in order to introduce and treat the idea of a transformative identity with multiple desires (even contradictory) and intensities. To investigate the short temporalities when the body ‘transforms’ or ‘shifts’ by finding out what bodily affects that is necessary in order achieve one.

Bod(ill)ess does not want to mystify death, but rather to treat it as a philosophical gesture. As Spinoza asserted:

“There is no reason to force me to admit that the body dies only when it turns into a cadaver; in truth, experience itself seems to demonstrate otherwise. It happens indeed sometimes that a man is the victim of such changes, that I could hardly say he is the same”

By refering to the above quote Bod(ill)ess examines that short temporality when the body changes. Therefore the investigation first wants to find out what it’s like to have an empty body? And what means are needed in order to practice one? without trying to emaciate the body.

a thought for departure 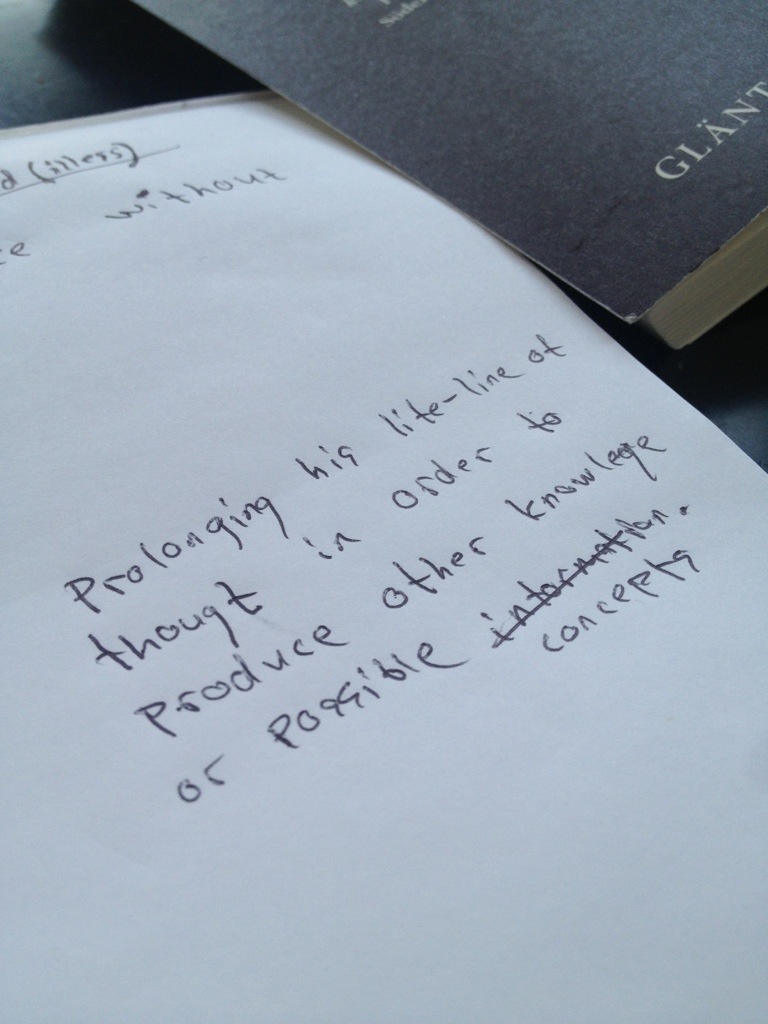 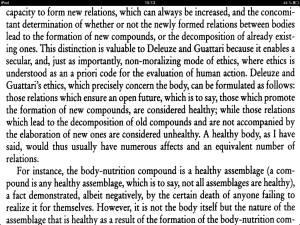 Deleuze’s Death as an Event 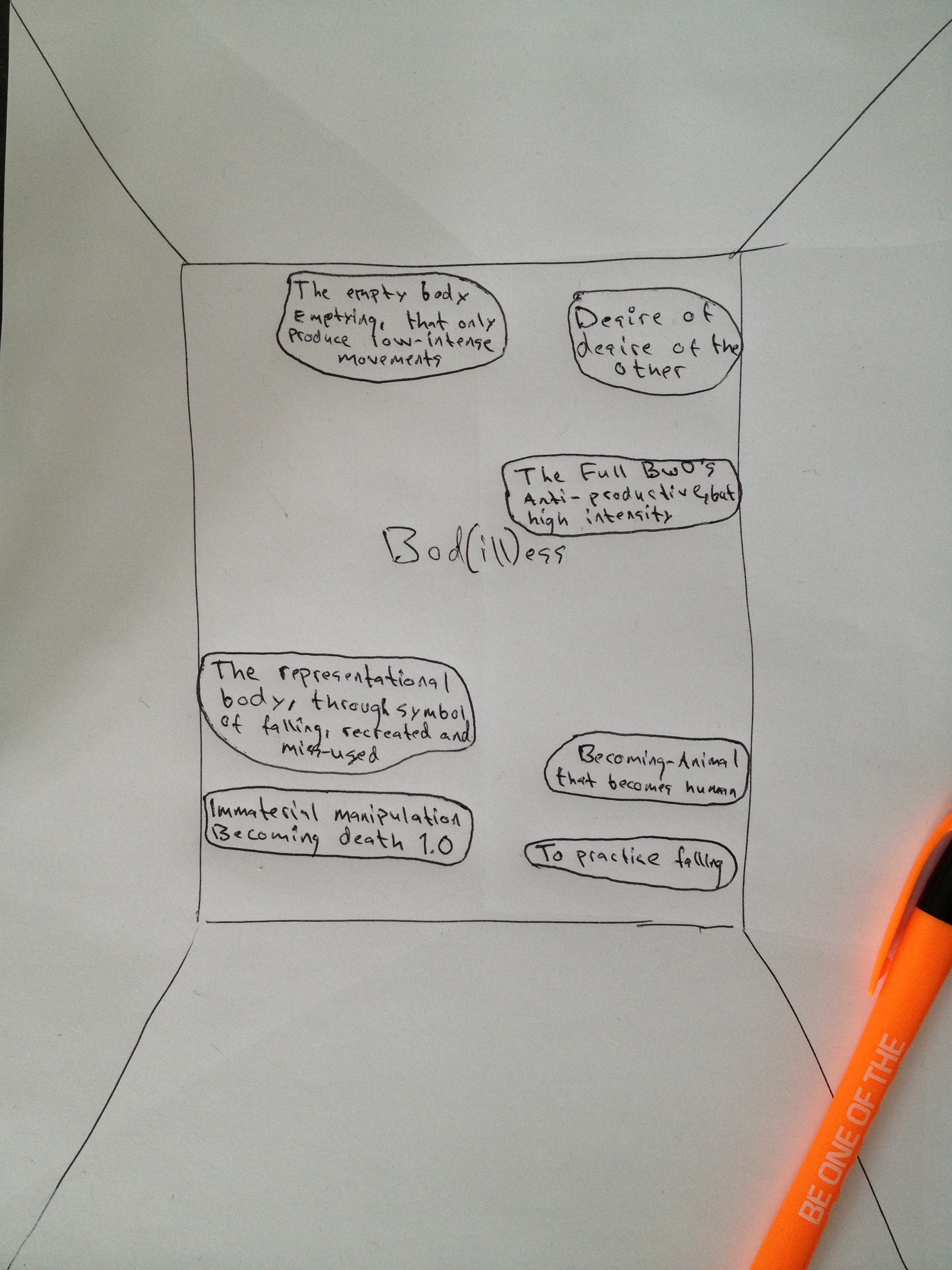 Ending, after the Credits?

Ending, after the Credits?
Why have we kept our own names? Out ofhabit, purely out ofhabit. To make ourselves unrecog­nizable in turn. To render imperceptible, not ourselves, but what makes us act, feel, and think. Also because it’s nice to talk like everybody else, to say the sun rises, when everybody knows it’s only a manner of speaking. To reach, not the point where one no longer says I, but the point where it is no longer of any importance whether one says I. We are no longer ourselves. Each will know his own. We have been aided, inspired, multiplied. 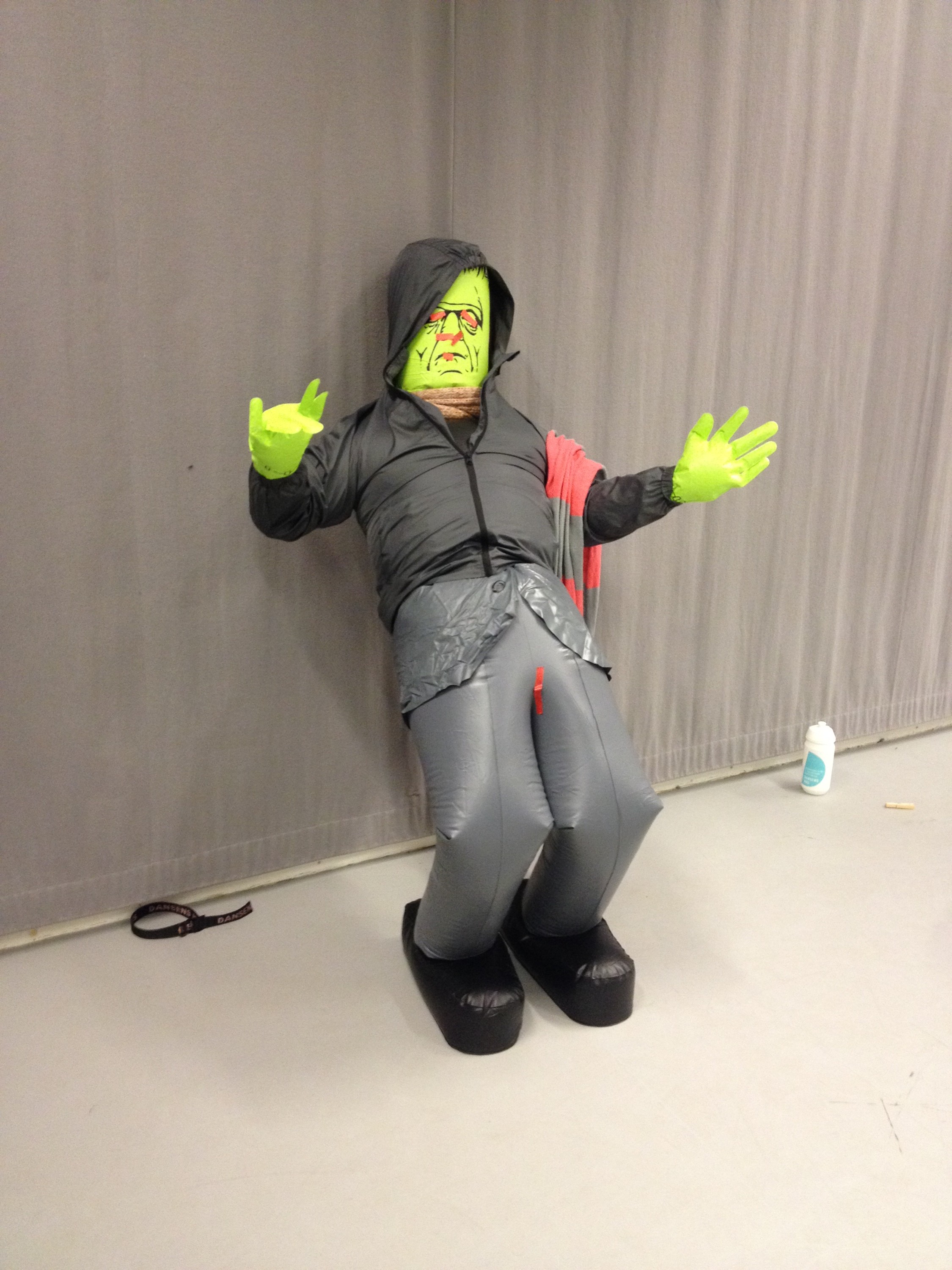 Teaser of the piece Bod(ill)ess